What is E-Commerce? History, Present and the Future 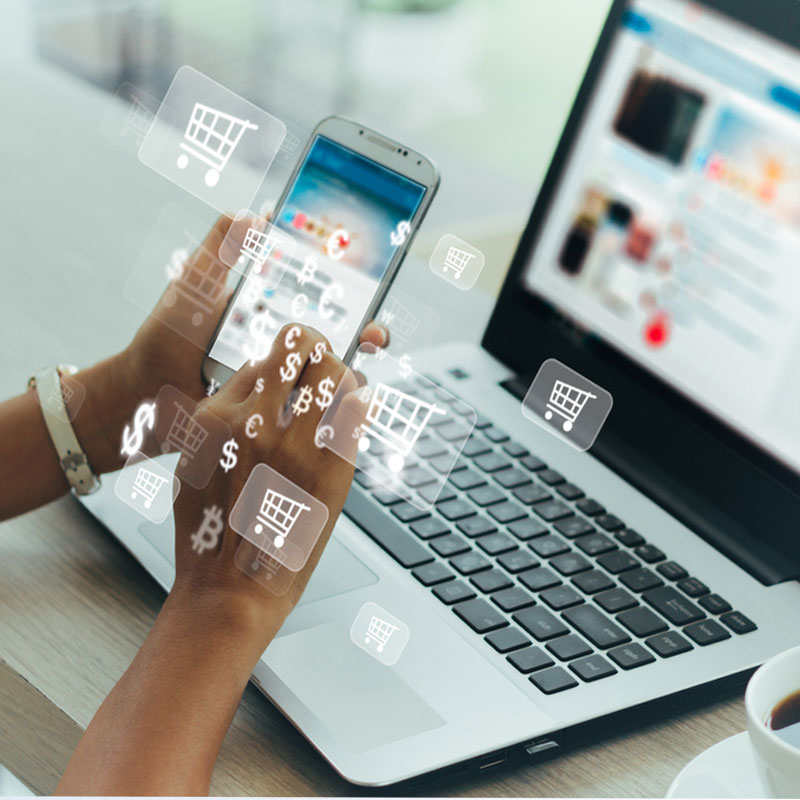 An Introduction to E-commerce

E-commerce has been in existence for years now, and it has improved. We have to look back and review its history before we can celebrate the present and future of eCommerce.

Electronic commerce plays a critical role online. By considering the following, e-commerce can help grow your business. Online Store, Online Payment & Mobile Commerce. Ecommerce is here to stay and won’t be going away or fading out anytime soon.

Social media platforms such as Facebook, Instagram, and Twitter work alongside mobile apps to launch or introduce themselves into consumers’ lives while trying to influence their buying behavior. In no way can you ignore eCommerce. It is not a trend. It’s everywhere. We normally use eCommerce in our daily lives, from ordering food online, paying for stuff online, and having food delivered or picked up. It’s here to stay with us and we have to make use of it. It’s also projected to continue to rise in the years to come.

E-commerce needs to be an essential component of it regardless of the size of the company. In some ways or another, e-commerce is integrated into our society and will continue to impact it positively or negatively.

E-commerce must be a major part of any business, regardless of its size. Why? E-commerce has been ingrained in our culture and will continue to have a beneficial or negative impact in some way, shape, or form. Do you disagree? Take a look around your neighborhood. Can you count how many vacant brick-and-mortar establishments there are? Unfortunately, the figure you calculated represents individuals who have succumbed to the popularity, accessibility, and convenience of e-commerce, as well as the presence and influence of bargain stores like Walmart. It didn’t happen all at once but over time.

What happened to them that caused them to become retail casualties? Those enterprises followed the traditional business model, in which a need is discovered and a store (now known as brick and mortar) is established to meet it. They attempted desperately to compete by offering coupons, discounts, and other marketing things as competition from internet competitors mounted and consumers’ purchasing tastes changed. Many have even made the switch from physical and mortar to online retailers. Retailers that allow customers to shop both in-store and online are referred to as click and mortar stores. Walmart and Target are wonderful examples of click and brick stores. Unfortunately, many businesses are still struggling to make the shift from brick and store to online.

Couldn’t make it. They didn’t respond quickly enough to shifting market conditions and client demands. They also couldn’t ignore the elephant in the room: Amazon.

What is the definition of e-commerce? People use names like online shopping, online store, and others interchangeably, but whatever name you give it, there’s no doubting that it has forever changed the way people shop. According to the Pew Internet Research Center, 79 percent of Americans bought something online in 2016, up from only 22% in 2000.

E-commerce stands for electronic commerce “the process of buying, selling, transferring, or exchanging products, services, and/or information via computer networks, mainly the Internet and intranets.”

The History of E-commerce

Although e-commerce began in the 1960’s it was not the same as we know it today. Electronic Data Interchange (EDI) allowed businesses to exchange business documents with the computers of other businesses.

Newer technologies continued to be developed as the decade proceeded. In the United Kingdom, Videotext, a two-communication service, was explored and produced in 1970. Michael Aldrich, an English inventor, and entrepreneur, pioneered the notion of online commerce between businesses and consumers (B2C) and businesses and businesses (B2B) in 1979. (B2B). Online shopping grew popular in the United States during the same year, thanks to companies like CompuServe and The Source. Thomas Holidays UK introduced the first B2B online buying system in 1981.

Minitel was founded in 1982 in France as an online service that allowed users to make online purchases, check market share, look up phone numbers, and communicate. This was noteworthy since it was the first website on the Internet.

If you are like most people, when you hear the term “e-commerce” or “online store,” you immediately think of the granddaddy of them all: Jumia (Figure 1-1). Before it became the go-to source to find anything and everything, it started out with one purpose: to be an online bookstore. Many questioned whether an online bookstore would succeed because the traditional model involved visiting a physical bookstore to browse and purchase books. Jumia changed not only how people bought books but also how they read them with the creation of the Kindle. The Kindle introduced consumers to electronic books or e-books that could be purchased and read on the device without carrying around physical books. It revolutionized how we read books.

Today Jumia sells not only books but also clothing, electronics, food, toys, health and beauty items, and much more. You name it, and you can probably find it on Jumia. Often, we wonder how we ever made it without them. Jumia represents the Gold Standard of e-commerce that all other online retailers, big or small, are measured against, compete with, and aspire to be. Although Jumia might be the most popular online marketplace that immediately comes to most people’s minds, there are other players that have contributed to the e-commerce evolution. One e-commerce marketplace that comes to mind is eBay. Founded two months after Jumia by Pierre Omidyar, an American billionaire entrepreneur, eBay created an online marketplace for consumer-to-consumer and business-to-consumer transactions. If people could not find what they were looking for on Jumia.com, they could search for it on Tonaton or Jiji as well as sell items. With its Mobile Money integration for online payments, businesses and consumers felt comfortable using the website.

In 1999, Alibaba was founded by Jack Ma. It is considered China’s and possibly the world’s biggest e-commerce company. According to the Wall Street Journal, Alibaba transactions on its three websites (Taobao, Tmall, and Alibaba.com) were estimated to reach $713 billion last year, surpassing both eBay and Amazon.com combined. In the same year, Sky Dayton and Jake Winebaum founded business.com. Business.com not only provides information and resources for small businesses but also provided a marketplace for business products and services.  Purch, a digital marketing company, later acquired business.com.

Everyone loves getting a deal and Groupon.com does not disappoint. It was established as a “deal-of-the-day recommendation service for consumers.”These “deals” are typically deeply discounted, saving consumers money. Whether consumers use the Groupon website or the app, they can use the free service to find travel destinations, products, and services discounts from merchants located in over 15 countries.

Before 1995, consumers relied heavily on physical stores for their everyday needs.
In e-commerce terminology, physical stores are also referred to as brick and mortar stores. Many of these brick-and-mortar stores were near their homes or in surrounding communities and carried the items they needed. Consumers could see and touch the items and immediately purchase them, resulting in instant gratification. Once the purchase was over, the relationship between the business and the consumer ended until the next visit or items were returned. This is also referred to as a business-to-consumer (B2C) model, which most of us are familiar with due to our own consumer experiences. However, on certain occasions, these items were out of stock. When these items were out of stock, they either drove to another location, had the items ordered from another location by the first store they visited that was out of stock, or waited until it was back in stock. Depending on the item’s popularity, it could take a while, which would lead to frustration and dissatisfaction.

Get updates and learn from the best

What is Search Engine Optimization (SEO) and How can it help your website?

SEO is a methodology used to gain traffic by making your website visible in search engine results via organic or paid techniques. The term organic

Since 1995, technology has steadily advanced to the point that what was once a dream is now a reality. Instead of visiting brick-and-mortar stores to

Do You Want To Boost Your Business?

drop us a line and keep in touch